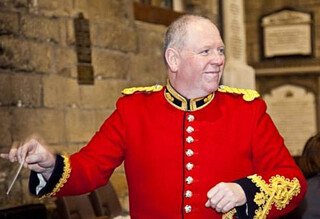 Simon Kerwin was brought up in the heart of the brass band community in Wigan (near Manchester, England). He first learnt to play the baritone at the age of twelve progressing to the euphonium soon after and finally settling on the tuba when he joined the successful Wingates Brass Band at the age of seventeen.

Simon has been working many years as a professional musician. During this time, he spent three years gaining an honours degree in Band Musicianship at the Salford University College. At the college, Simon majored in composition, arranging, conducting and performance. All these components made up his life as a professional musician. Through his time at college, Simon was able to study with some of the great composers including James Curnow, John Golland, Phillip Sparke, Peter Graham, Arthur Butterworth and Michael Ball.

Ninety five percent of Simon’s arrangements and compositions are a result of a commission from a band, ensemble, choir or publisher. Throughout his career he has acted as composer/arranger in residence to bands such as Wingates, Yorkshire Building Society and the James Shepherd Versatile brass. Although Simon had many publishers to publish his work, he thought it useful to set up his own publishing house, running under the appropriate title of “Staves Ltd”.

Simon’s compositions and arrangements have been performed all over the world from South America to Australia. His music has also been published in five countries, been recorded on many CD’s and they have also been played on many television and radio programs throughout the globe.

As a tuba player Simon had played with many great bands including Wingates, Britannia Building Society, James Shepherd Versatile Brass and he also played in the winning performance at the European Championships in Bergen in 1996, with the Yorkshire Building Society Band. In addition to playing with these bands, Simon had also performed as a soloist in many locations throughout Europe. Simon fulfilled his ambition to play with a professional orchestra early on in his career, when he often performed with the famous Hallè Orchestra from Manchester. Simon had also conducted many bands over the last years.

As a conductor Simon had developed his career whilst working as a freelance musician in Scandinavia, where he conducted various brass bands, wind bands, choirs and orchestras. The Whitburn Band appointed Simon as resident musical director, and his wife took the position of principal cornet with the band in March 2000. These new positions brought Simon to Scotland. He has worked with many of the Bands and choirs in Scotland.

Finale from the Overture

Finale from the Overture